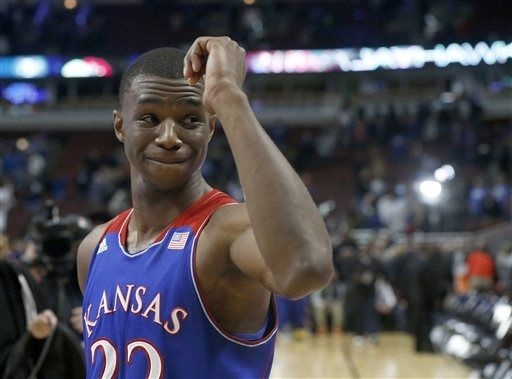 It was a thrilling and satisfying win for the No. 5 ranked Kansas Jayhawks over the No. 4 ranked Duke Blue Devils. The final score of 94-83 was not at all indicative of the type of close matchup this was. Still, this was early-season basketball masked by a late-season atmosphere. Kansas has a long way to go, but here are some quick hitters from tonight’s victory.

Parker and Randle better today, Wiggins better tomorrow. Although Wiggins came on late and finished with an impressive stat line of his own, posting 22 points on 9-for-15 from the field, he labored through the early going. Parker and Randle, although they both had their own quiet moments tonight, both appear to be more college-ready at the moment. That being said, there is a reason why you won’t see Wiggins dropping off any draft boards just yet. When he shows what he is capable of, he is clearly the bigger talent of the three. Since he has one of the two best coaches in the land at his disposal, I think you see Wiggins develop a great deal throughout the year. Parker will continue to develop under Coach K, without question. I also believe that we may be seeing Randle closer to his collegiate peak as is. Still, it was great to see Wiggins go off for 20+ for the first time as a Jayhawk. Maybe it did take the competitive spark people talk about. He was his best when things got tight down the stretch. He certainly has that “it” factor you need to be a superstar. Now if he can just unlock that effort at will: watch out!

Perry Ellis was quietly the most impressive player of the night. Perry posted 24 points off a cool 9-for-13 shooting and added seven rebounds, two assists, two steals, and two turnovers. Sure Randle had 27 points but he also had eight turnovers. Parker finished with 27 of his own but he took 18 shots and disappeared for a long stretch in the second half when his team needed him. Perry was consistent the entire night and nothing has changed my mind that he will ultimately be the leading scorer for this Kansas team.  To think that he is not on the top 50 for the Wooden Award is laughable. I dare you to find 50 players in America more talented than Perry Ellis. Heck, find me 20 and I will be surprised.

Ellis had 1.85 points per field goal attempt while Parker had 1.5 points per FGA and Randle had 1.96. Add in the turnovers and Ellis was clearly the most impressive.

Kansas has heart. The way the team fought through the ups and downs of this game was impressive. Guys flat out made plays when they needed to and that is something you love to see from a team so young and inexperienced. Kansas didn’t have to go to Ellis (who cramped up late in the game) or Tharpe in the final 5 minutes to get a play. Selden, Wiggins, Mason and Traylor. They all had a piece of the action. This game should go a long way towards building confidence in one another.

Revisiting my keys to the game:

1. Tharpe (and Mason) stay out of foul trouble. Tharpe finished with two and Mason with three. Both were able to post a high number of minutes, but Mason was the more impressive of the point guards on this night.

2. Three point shooting. KU did not attempt many threes tonight. When driving the ball almost guarantees points, you can figure why. KU was 3-for-8 for an average 38% while Duke went 7-18 for a slightly better 39%. It seemed like every time Kansas missed a three, Duke was able to get out in transition and score. Joel Embiid’s three point attempt was baffling. That cannot happen again.

3. Make your free throws. There were 63 free throes attempted in this game. KU posted a much improved 77.1 percent while Duke struggled to a paltry 57.1 percent from the charity stripe. This was the difference in the game. KU still has some room for improvement here.

I am giving myself a 2-for-3 for predicting the keys to the game tonight. Not great, but better than Duke’s FT %.

Beware of  the Blog’s Player of the Game: I am giving this to Perry Ellis tonight. Wiggins, who, despite a slow start and two early fouls, came through down the stretch and was the most important player for KU late. He also had the highlight play of the night for KU that simultaneously gave KU the last bit of distance it needed, and fouled out Duke’s biggest threat for a comeback in Parker. But Perry was Kansas’ best player throughout the night and effected the game in more ways more often than Wiggins. Both had great games.

You Let the Whole Team Down Award: Tonight, the cone of shame goes on Tharpe. He didn’t have a very good showing in a game where I though his leadership would be key. He posted seven points, but had three assists and three turnovers, many of them absolutely horrid. I fully expect a bounce-back game from him next time out. 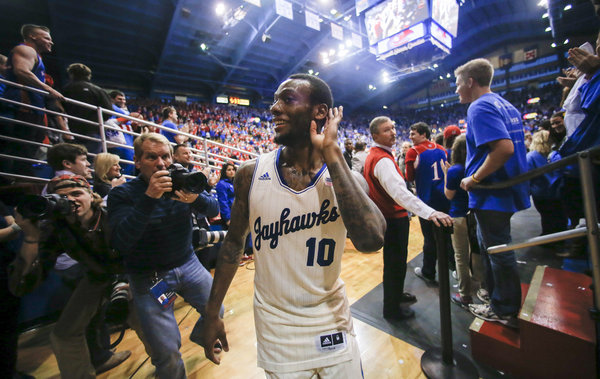