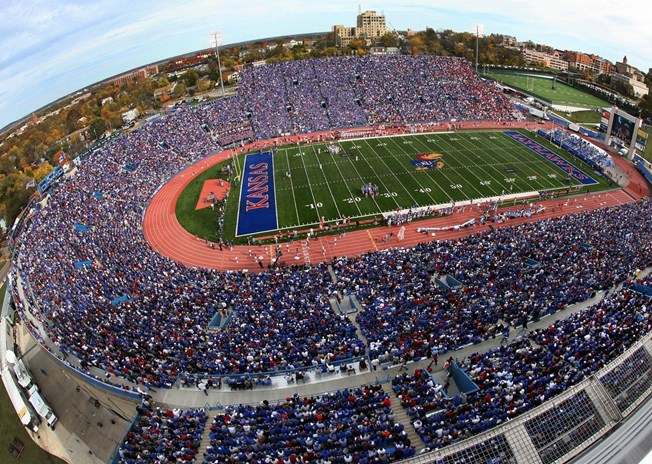 ESPN’s Big 12 writer is breaking down each of the Big 12 football schedules on their blog. Today, they took a look at KU.

Here’s what they had to say:

Gut-check time: It’s important for the Jayhawks to get off to a good start. An upset win at Duke in their second game of the season would exceed all expectations. It’s an early season road test against a bowl opponent who won 10 games in 2013, so even a strong showing could create enough momentum to get KU heading in the right direction before conference play begins.

Trap game: Central Michigan comes to Lawrence, Kansas, in the week following KU’s trip to Duke and right before Texas visits KU to open Big 12 play. If Charlie Weis’ team has any hope to exceed last year’s win total (3-9) or even battle for a bowl appearance, the Jayhawks will need to win this game.

Snoozer: People may not even notice the Jayhawks’ season opener. The Sept. 6 game against SE Missouri St. comes one week after most teams kick off their season on Aug. 30 and features two teams that combined to win six games a year ago. It is Montell Cozart’s first opportunity to show Weis he made the right decision by naming Cozart the starter. The decision to go with Cozart gives the game some intrigue. But it’s safe to say few people will have this game on their priority list on Sept. 6.

Telltale stretch: It’s likely we will know everything we need to know about Kansas after its three-game stretch against Texas, West Virginia and Oklahoma State. KU hosts UT and OSU and lost by a combined 10 points to the Longhorns and Cowboys the last time those two schools visited Lawrence in 2012. With unknowns at UT and OSU heading into the season, it’s not impossible for the Jayhawks to win at least one of those games, and the journey to West Virginia will begin with the confidence that KU beat WVU in 2013. If the Jayhawks win two of these three games, Weis’ squad could be in line for its best season under the veteran coach.

Final analysis: While KU faces a challenging schedule, it’s a schedule full of opportunity as well. The road slate is extremely difficult with visits to Oklahoma, Baylor, Kansas State, Texas Tech and West Virginia, but the home schedule doesn’t feature any games that aren’t winnable, particularly with significant questions about Texas, OSU and TCU heading into the season. A six-win season is attainable if the Jayhawks’ offense takes a major step forward and the defense approaches or exceeds its 2013 performance.

Cover32, a blog that covers the Denver Broncos, wrote a nice piece on Chris Harris and Aqib Talib. Both Talib and Harris, KU grads, are expected to be the cornerstones of their cornerbacks.

Harris is coming off ACL surgery and isn’t expected to miss any games. Harris has spent his entire career with the Broncos while Talib signed with Denver in the offseason.

Several Jayhawks have caught the attention of the people who put together preseason watch lists. Here are the players we’ve seen get recognized so far:

Heeney’s inclusion on the Bednarik Award watch list is probably the most exciting. It’s given annually to the best defensive player in college football. Players such as Charles Woodson, Patrick Peterson, Julius Peppers and Manti T’eo have won this prestigious award.

Brad Thorson who played at Kansas from 2008 to 2010 and played briefly in the NFL with the Arizona Cardinals announced he is gay last week. Thorson did a Q&A with the Topeka Capital Journal and also posted this message on Instagram, which is an email he received from his father.

Thorson has said the reaction has been positive so far and some of his former teammates have reached out to him to show their support.