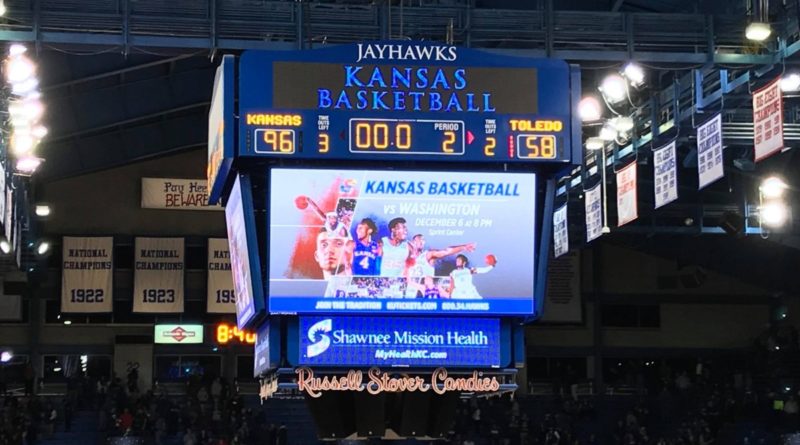 Sooner or later, you knew that Devonte’ Graham was going to go off.

Unfortunately for Toledo, that took place Tuesday night. Here are some takeaways from Kansas’ 96-64 demolishing of the Rockets on Tuesday night:

1. A historic night for Devonte’ Graham

35 points on 14-for-19 shooting, five threes, five rebounds, five assists, two steals, and no turnovers. Graham smashed his career-high in points in just 30 minutes. He even sat the last seven minutes, meaning this could have been an even bigger game had the score been closer.

But here’s the thing on Graham. He made 14 shots, the most any Jayhawk has had in a game under Bill Self. The 35 points are the second-highest total for any KU player in a home game in the Self era. It was a fabulous game, but it didn’t feel out of the ordinary at all. As well as Svi Mykhailiuk and Lagerald Vick have played this year, Devonte’ Graham was always the team’s best player. He was always the most trustworthy shooter. He was always the safest bet to make a big play. It now appears that the lid has come off the bucket for Graham, and considering the way the rest of KU’s backcourt is playing, that should absolutely terrify anybody that has Kansas on their upcoming schedule.

2. A team that finally does what fans have been longing for

They blow out inferior teams. How many past years did fans sit through non-conference nail-biters, like that 75-69 win over Harvard a couple years ago? The 2017-18 Jayhawks are experienced, and that’s keying their ability to absolutely demolish the opponents they should demolish.

In five home games this year, the Jayhawks have led by 29, 29, 36, 29, and 29 at halftime. They’ve put up at least 55 points in the first half of all five games. Fueled by the Allen Fieldhouse crowd, they’re putting teams away in a hurry. I mean, it was 16-14 eight minutes in, and then KU fired off a 32-3 run without effort. They went 9-for-11 on threes in the first half. It seems like quick starts have been a problem in previous years, but this team seems to understand the importance of squashing inferior opponents’ upset bids quickly.

Malik Newman was picked by many to lead the 2017-18 Jayhawks in scoring. Through five games, a lot of fans pegged him as the team’s biggest disappointment in the early part of the year. Newman put forth his best game as a Jayhawk on Tuesday night, scoring 17 points on 7-for-10 shooting and contributing three rebounds, two assists, and three steals with zero turnovers.

Newman still has tendency to play hero-ball a bit too frequently, but when he’s in control and looking at the floor before making a decision, there are few players in the conference you’d want in control more. Newman has now scored at least 12 points in all six games this year. He’s 12-for-24 (50%) on threes. He hasn’t missed a free throw (11 for 11). He’s also been a really good defender, which is the main reason Self has stayed patient through his early-season shooting frustrations.

4. Marcus Garrett is so much better than anybody realizes

He didn’t score, but he led the team in rebounding with seven. Did you know that Garrett is KU’s leading rebounder? He has more rebounds per game than Udoka Azubuike, Lagerald Vick, and everyone else, for that matter. He stuffed the rest of his stat line with four assists and two steals. He took just one shot in 25 minutes, and he was as important as anybody on the floor.

There are going to be games in conference play this year that KU wins 64-61 in hideous fashion, and we’re going to look at Marcus Garrett’s three points in 32 minutes and not think much of it. But Self will open that game’s presser by calling him the best player in the contest because of his defense (he’s already the best on-ball defender on the team) and his high basketball IQ. We’re talking about a freshman that has turned the ball over just five times in 151 minutes this year. He’s such a valuable piece to Kansas, and anybody who doesn’t realize it needs to listen to Bill Self more.

5. Where is this team’s first loss?

Syracuse is ok. Washington isn’t good. Arizona State is a top-20 squad, but that game is at Allen Fieldhouse. Nebraska and Stanford are meh. It’s hard to envision this team getting clipped before conference play begins, and even then, they’ll be favored in their first six league games. There’s a decent chance the Jayhawks will be 17-0 traveling to Morgantown to face West Virginia, where they’re long overdue for a win. Undefeated through November for the first time since 2010-11, the Jayhawks won’t be changing the 0 in their loss column any time soon.

Udoka Azubuike wasn’t leaned on as much as he was in the last few games, but he still put up 12 points and five rebounds. Lagerald Vick struggled, going just 3-for-9 from the field, but the other guards picked him up. Svi Mykhailiuk hit 5-for-6 threes and is now at 59% on the year (23-for-39). Mitch Lightfoot got 21 minutes. Chris Teahan hit a bucket. Norm Roberts’ son got a couple of them.

I was skeptical about this team. I didn’t think they’d score enough inside or play consistent enough defense to contend for a national title. While they’ve played five cupcakes and narrowly escaped a C- game from Kentucky, there’s something about them that’s just impressed me. Kansas’ offense can hang with anybody, and Marcus Garrett is that missing defensive piece it needed to finish off tight games late. It looks like Bill Self, once again, has a team that’s going to enter March as a favorite to make the Final Four. 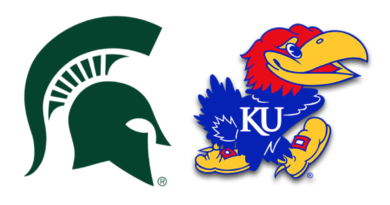